My future plans in three steps:
1. Get a time machine
2. Order all these things from a 70s Sears Wishbook
3: Live my best vintage life

Here are a few shots from the catalogues that I just HAD to share:

The toy section was by far my favourite part of the wishbook! Barbies from the 1970s are badass. LOOK AT THE HAIR ON THAT KEN!

I never knew I needed a shopping cart charm for my charm bracelet until now. And I will not rest until I have one.

Thanks so much for stopping by! If you dig this video, may I point you in the direction of my YouTube Channel. or peep my previous posts: my Estate Sale Haul or my 2019 Spokane Washington Fall Road Trip Vlog. xo

It is no surprise that my obscure and random interests sometimes bleed into my style inspiration. If you’ve stopped by this page a few times, you may be familiar with my on going world wide Tiki Tour. The thrill of finding a tiki bar untouched by the passing of time is a unicorn I am constantly chasing. Pair that with my love of vintage and naturally one would assume I collected Hawaiian shirts. This assumption would be correct. From children’s Harley Davidson Hawaiian shirts to this one I’m currently wearing, a gem by a Canadian designer Marjorie Hamilton. My vintage Hawaiian shirt collection is mostly in storage but this one managed to sneak into my main closet. Thank goodness because it was meant to be worn with these pants 🙂

A funny thing happens when thrifting becomes a regular habit. When I was deep into the second hand world, I would frequent stores several times a week. I even had an Etsy shop which I’m considering reopening right on this blog! (Let me know if that’s of interest to anyone). The more I went, the more I would see the same labels over and over again to the point at which I started to develop favourites. Marjorie Hamilton became one of them and this flamboyant blouse just happens to be by her. Mr Jax (not to be confused with the Vanderpump Rules icky cast member) was another favourite label I came across repeatedly. Have you ever found vintage labels you seem to gravitate towards again and again? 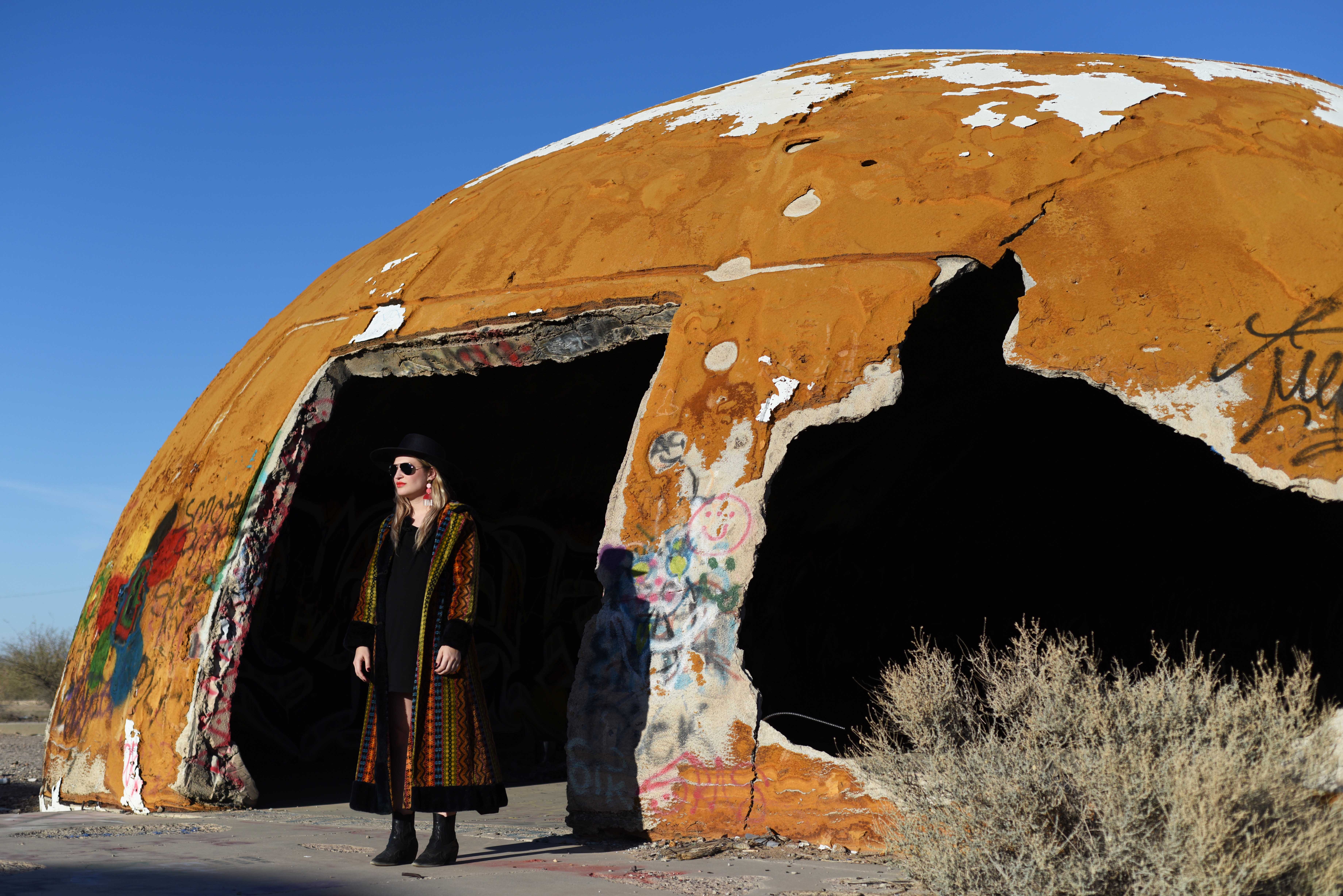 Sometimes the universe conspires in positive ways. Like when my parents decided to stop at a garage sale that just happened to have the most fabulous coat ever. A coat that is unfitting for the desert climate. A coat that is just so perfect for a person like me: obsessed with the 60s, interested in cults, and a natural born peacock. Add this cult leader coat to the mystery that is the Casa Grande Domes. That is what I like to call the ultimate Pretty Secrets style editorial. My essence distilled to its most potent point. I liken it to the magic I felt when we shot Dressed in Black, another desert editorial I still love. So keep scrolling to find out more about The Casa Grande Domes and get more deets on my outfit. 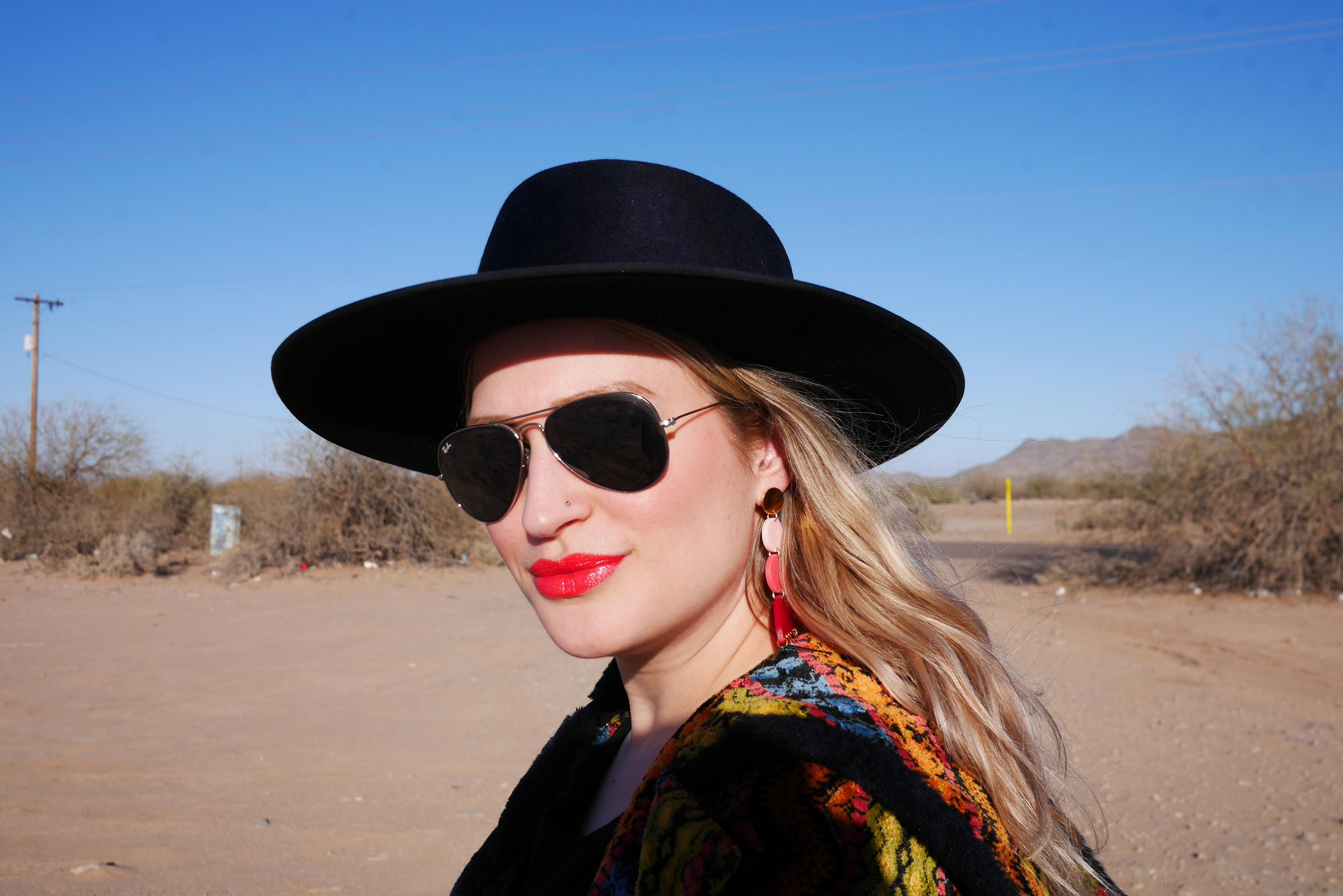 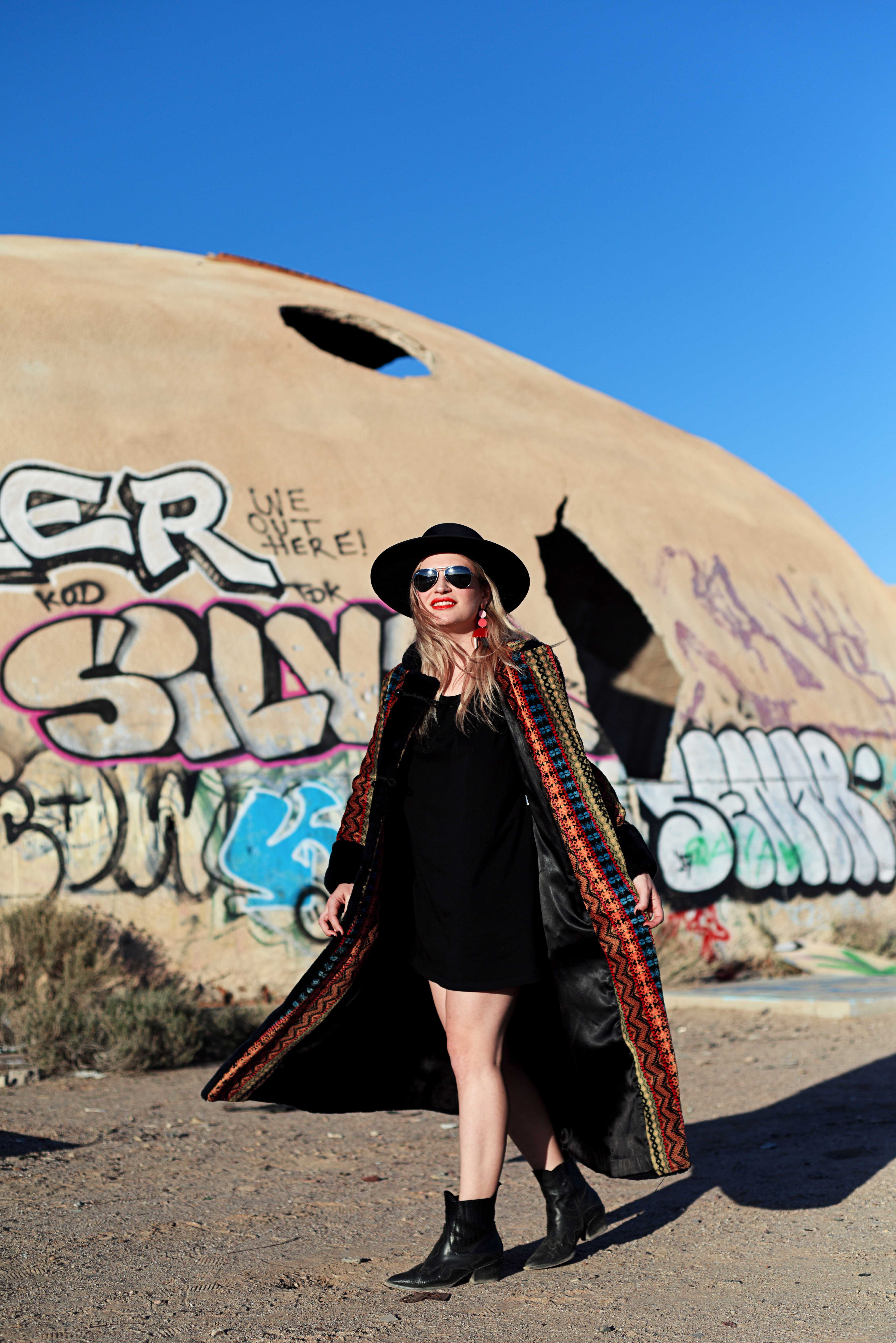 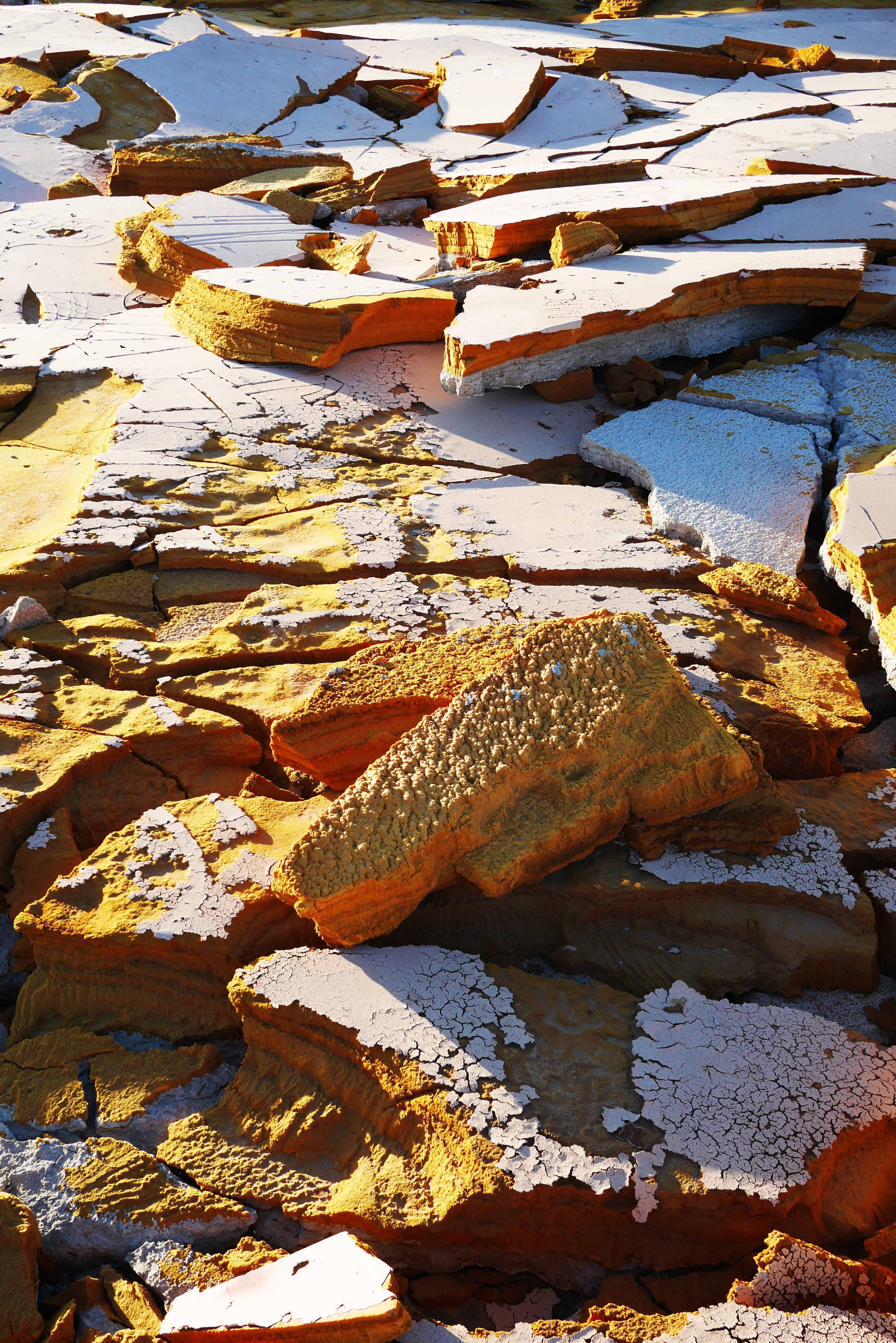 The Casa Grande Domes have an interesting history. They were built in the early 80s as a computer manufacturing facility which never came to fruition. The acoustics within each cluster of domes sound so cacophonous it’s hard to imagine anyone manufacturing anything in there without going deaf. After that, it’s said that the next residents were local occult and witchcraft enthusiasts who used to the domes for satanic worship and rituals. From the many articles I have read about the Casa Grande Domes, there have been warnings about “the tunnels.” The majority have been filled in with the collapse of the eastern dome. Calling it a tunnel is a generous word. A more accurate word would be trough. The Domes are slated for demolition as per the order of city of Casa Grande. 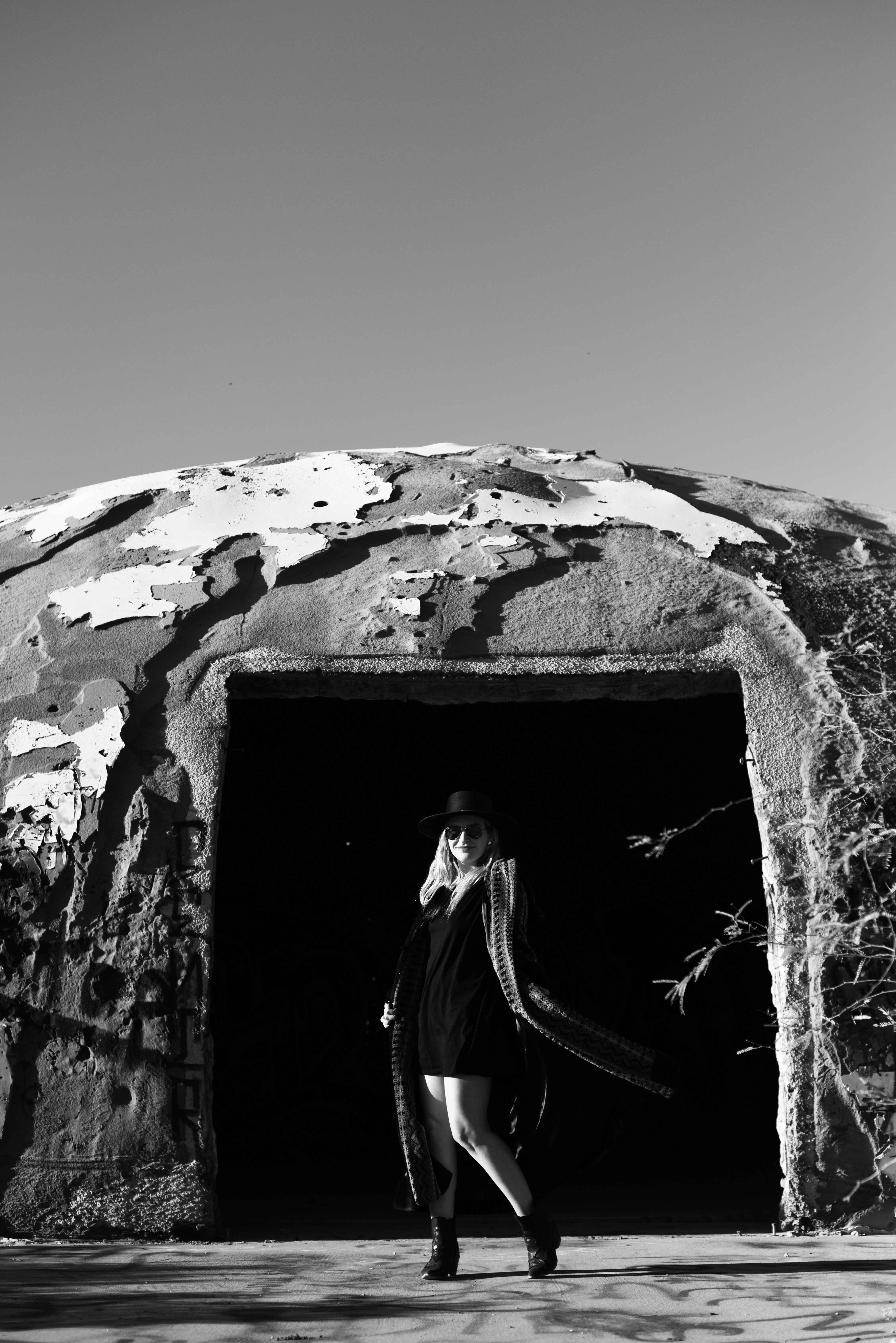 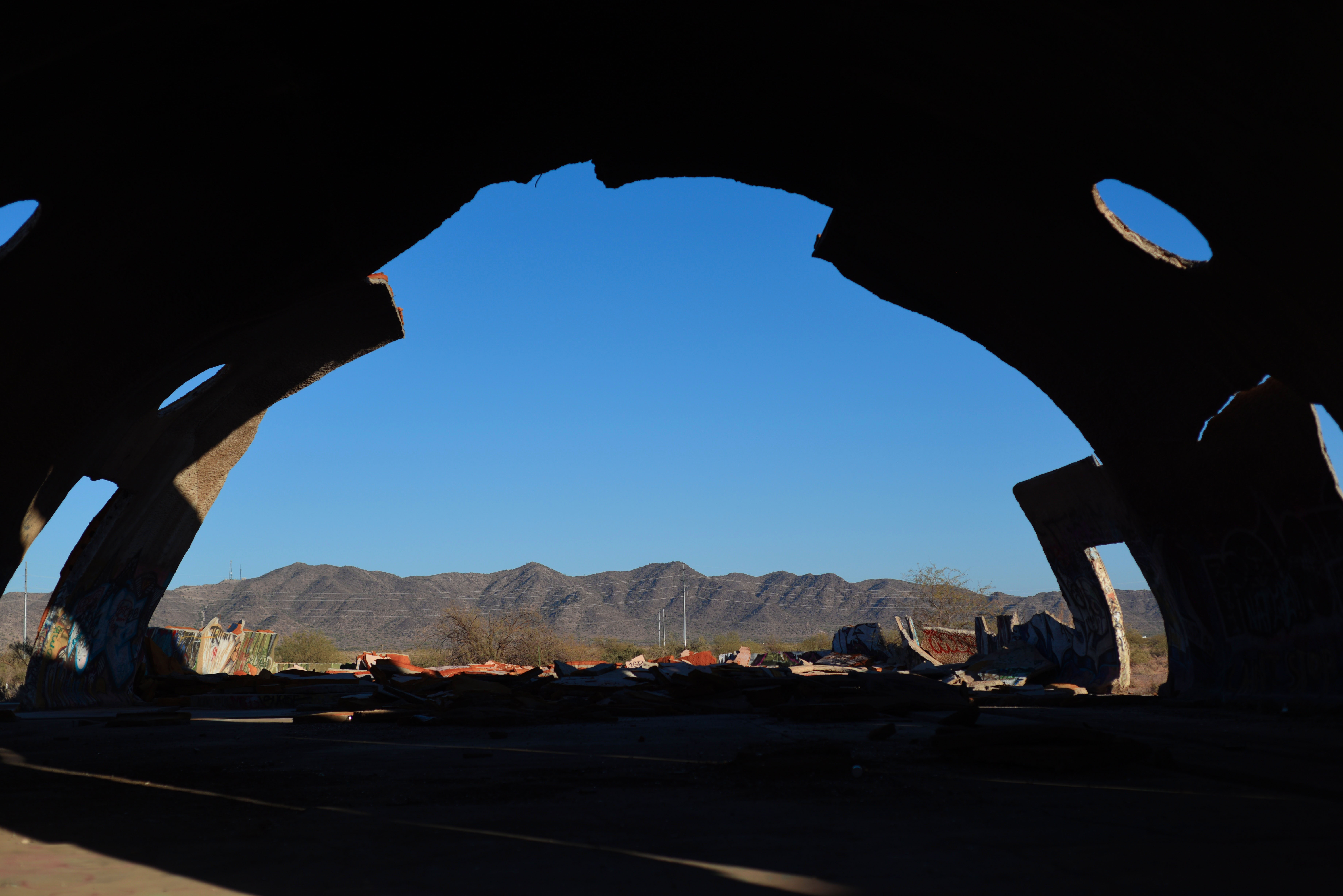 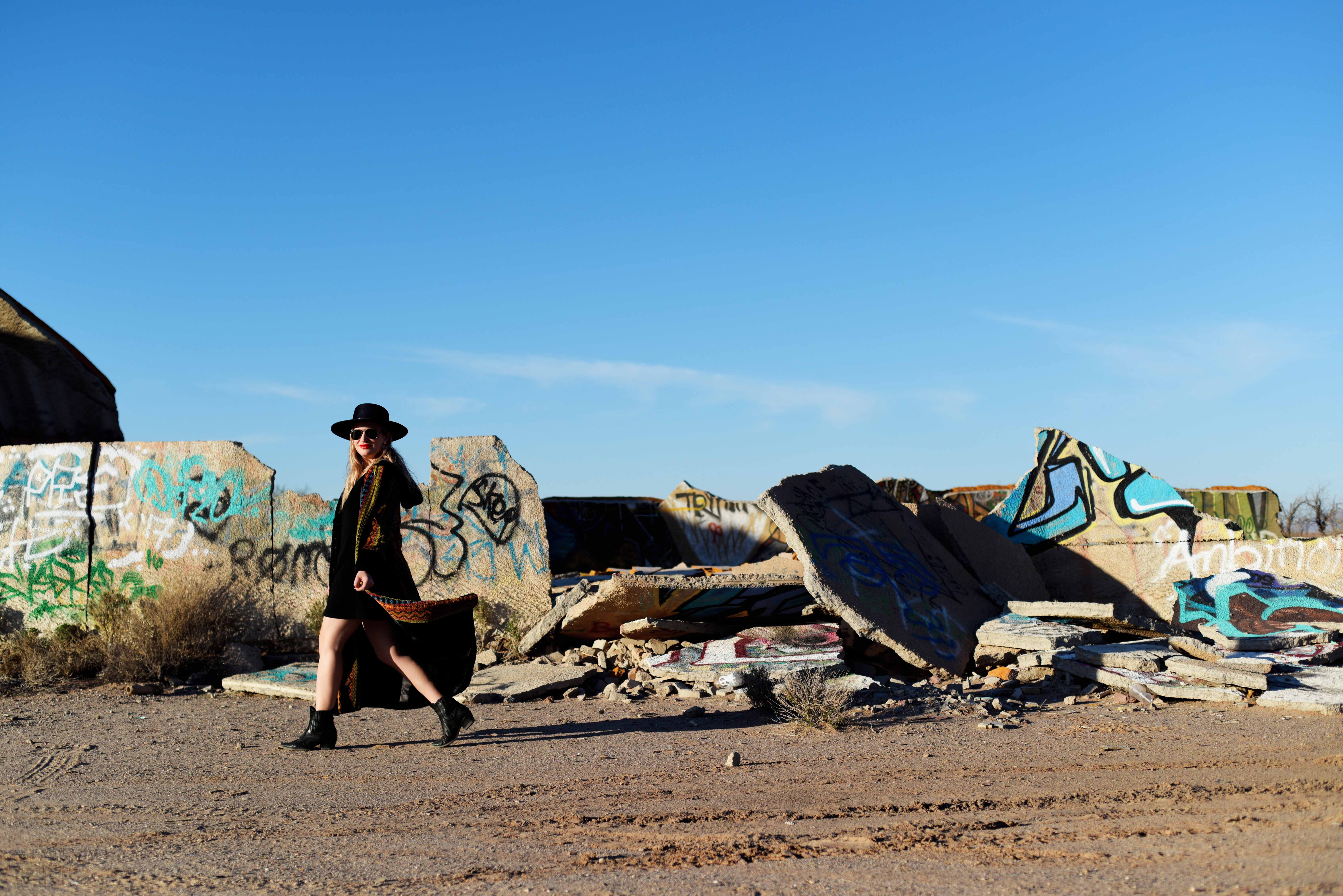 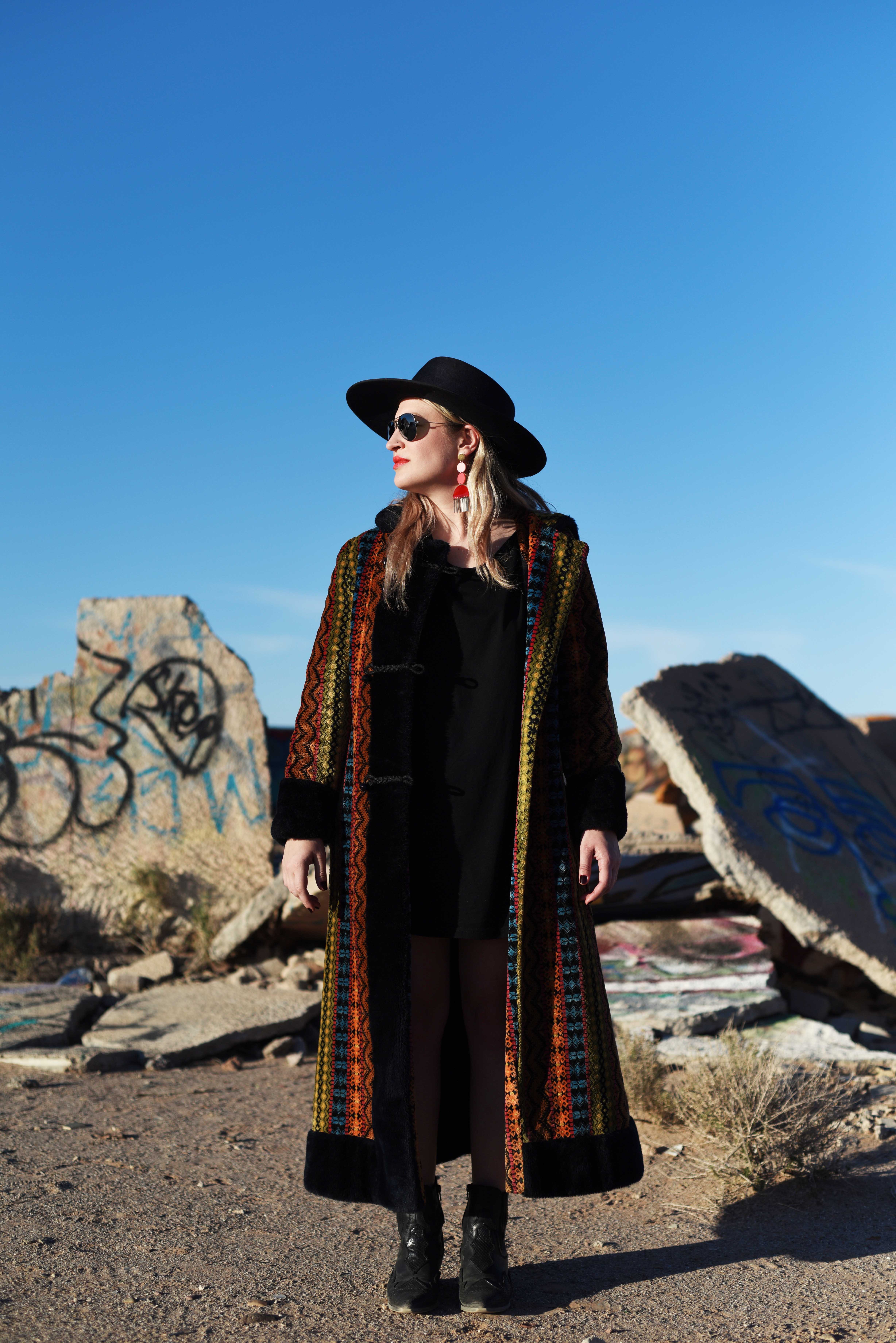 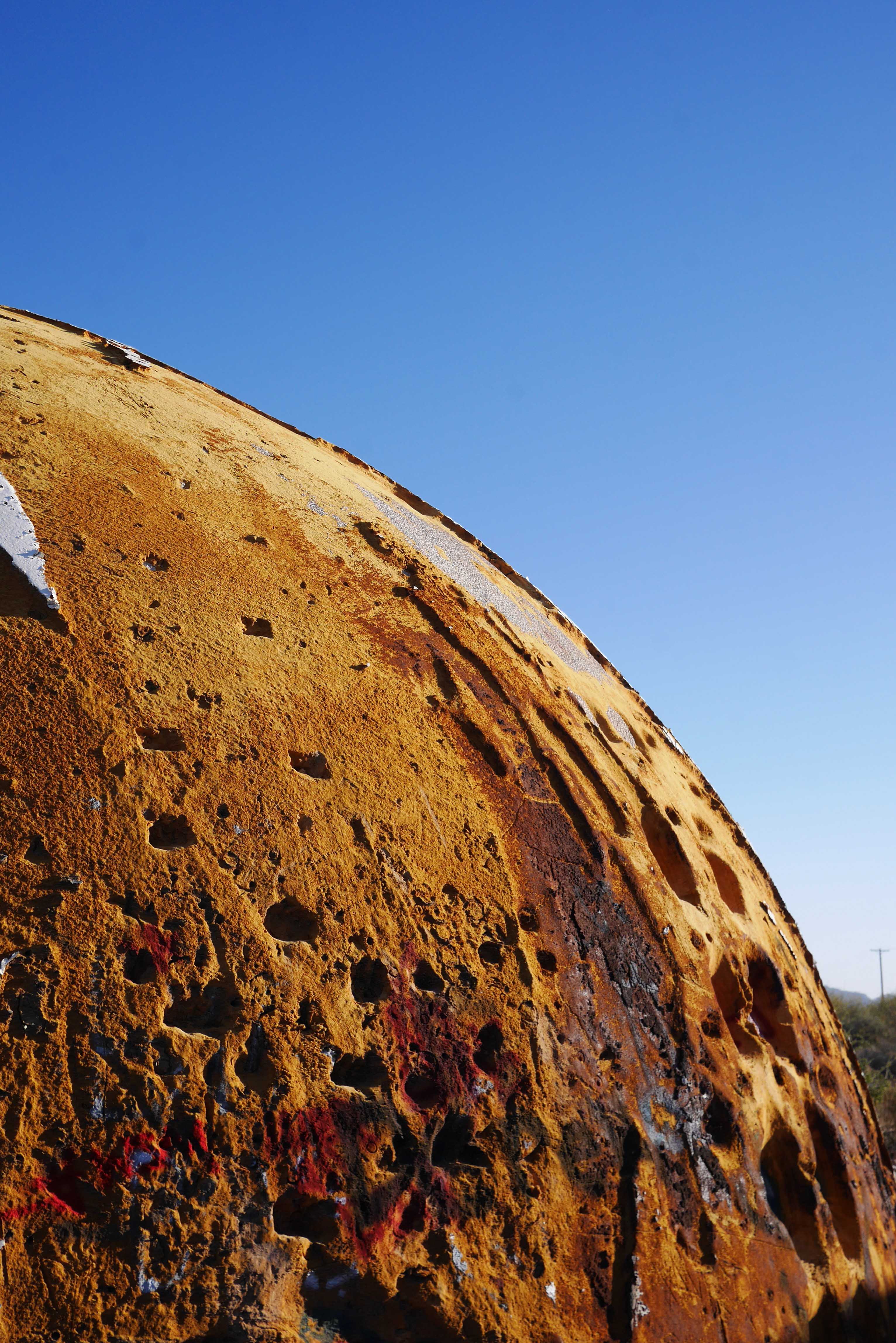 A Coat Fit For A Cult Leader

“I will start a fashion cult” was my first thought when I saw this coat in a text message from my mom as I frantically texted her back. My text read: “akjsfbdfjgbdkfjg BUY ITTTTT!!!!” This is everything I want in a coat. It’s made of a carpet like material. A carpet coat for Sandy Karpetz. The universe wants it to be! It has a pattern that is reminiscent of a velvet black light poster. These are the things in common with all of my favourite pieces of clothing. 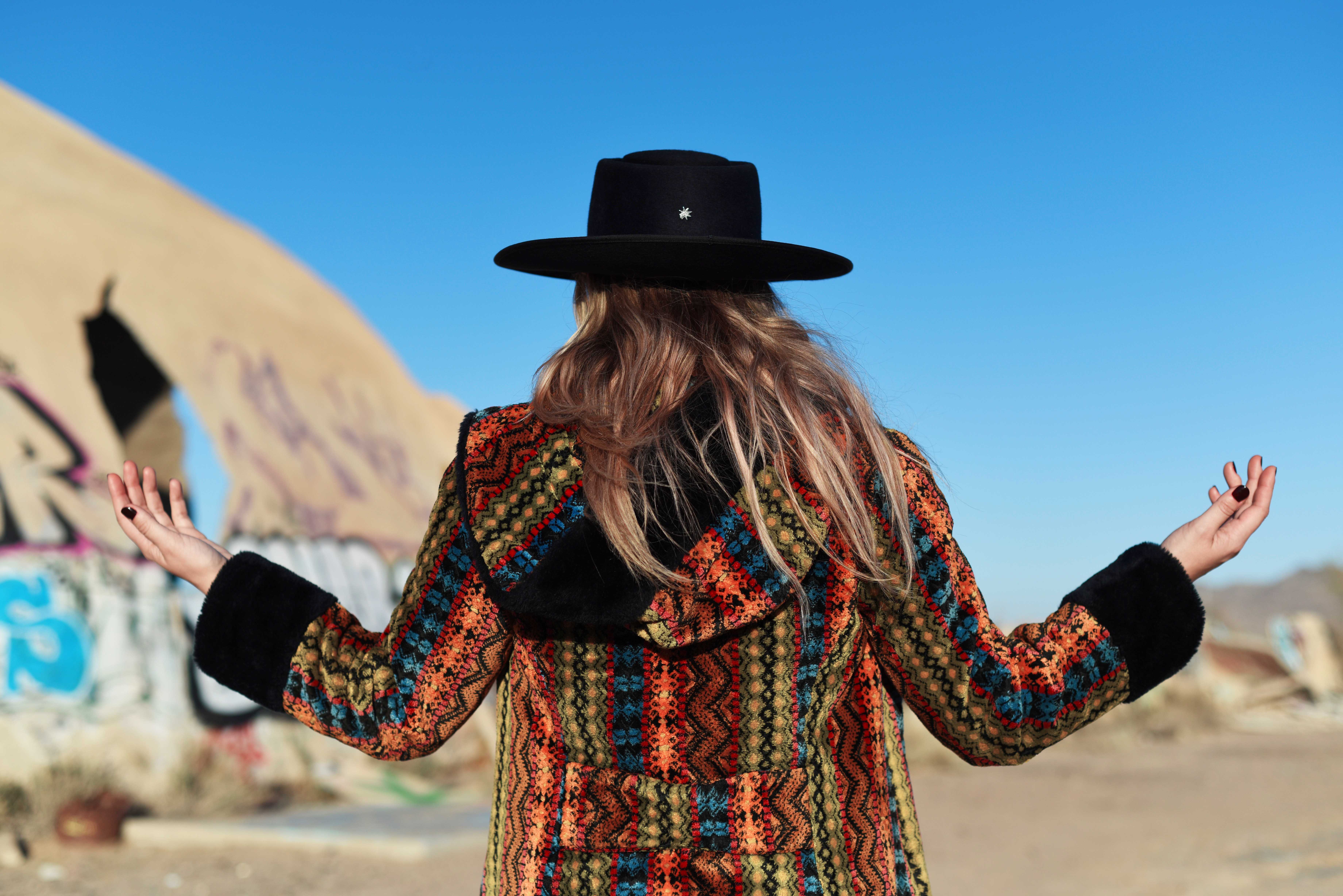 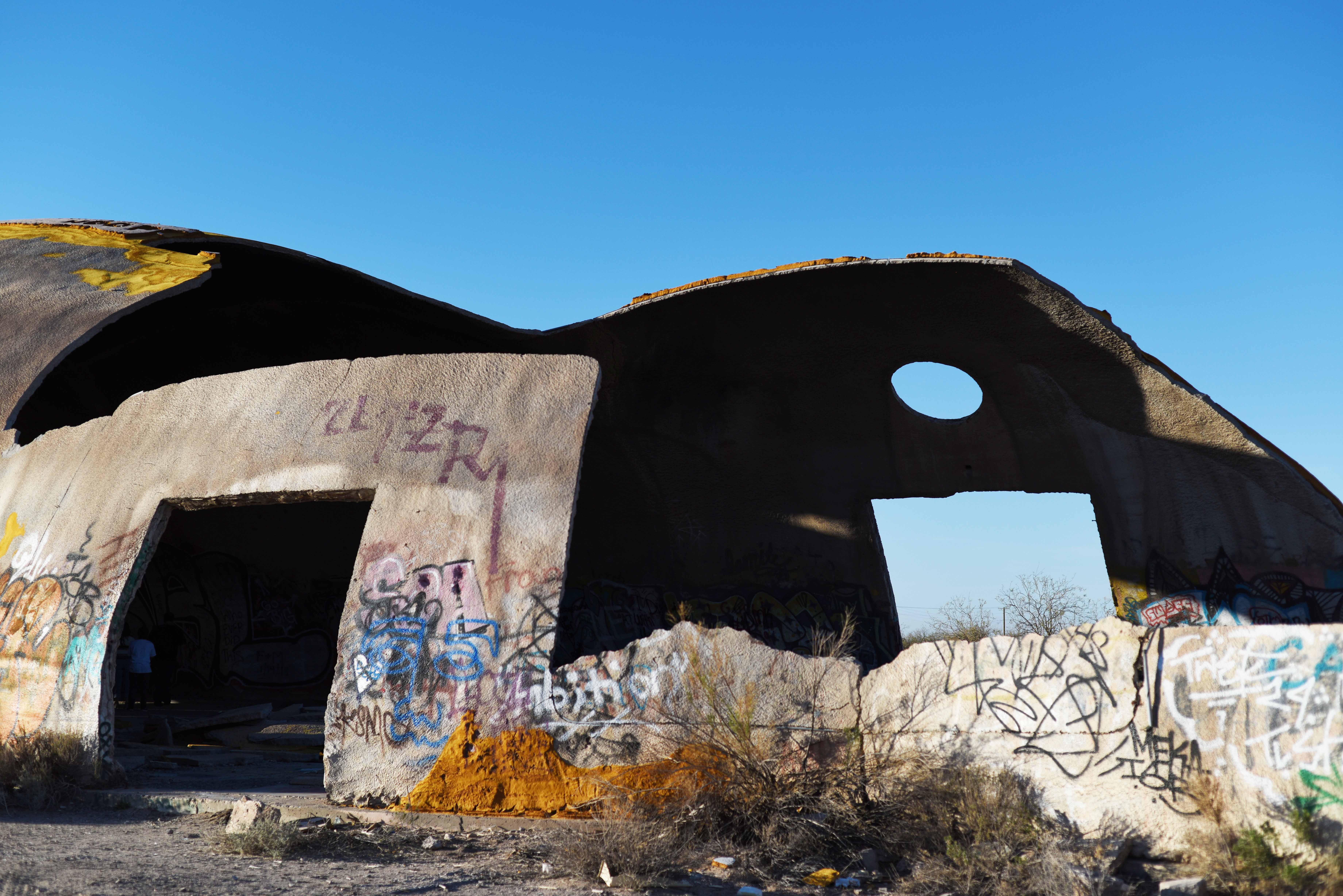 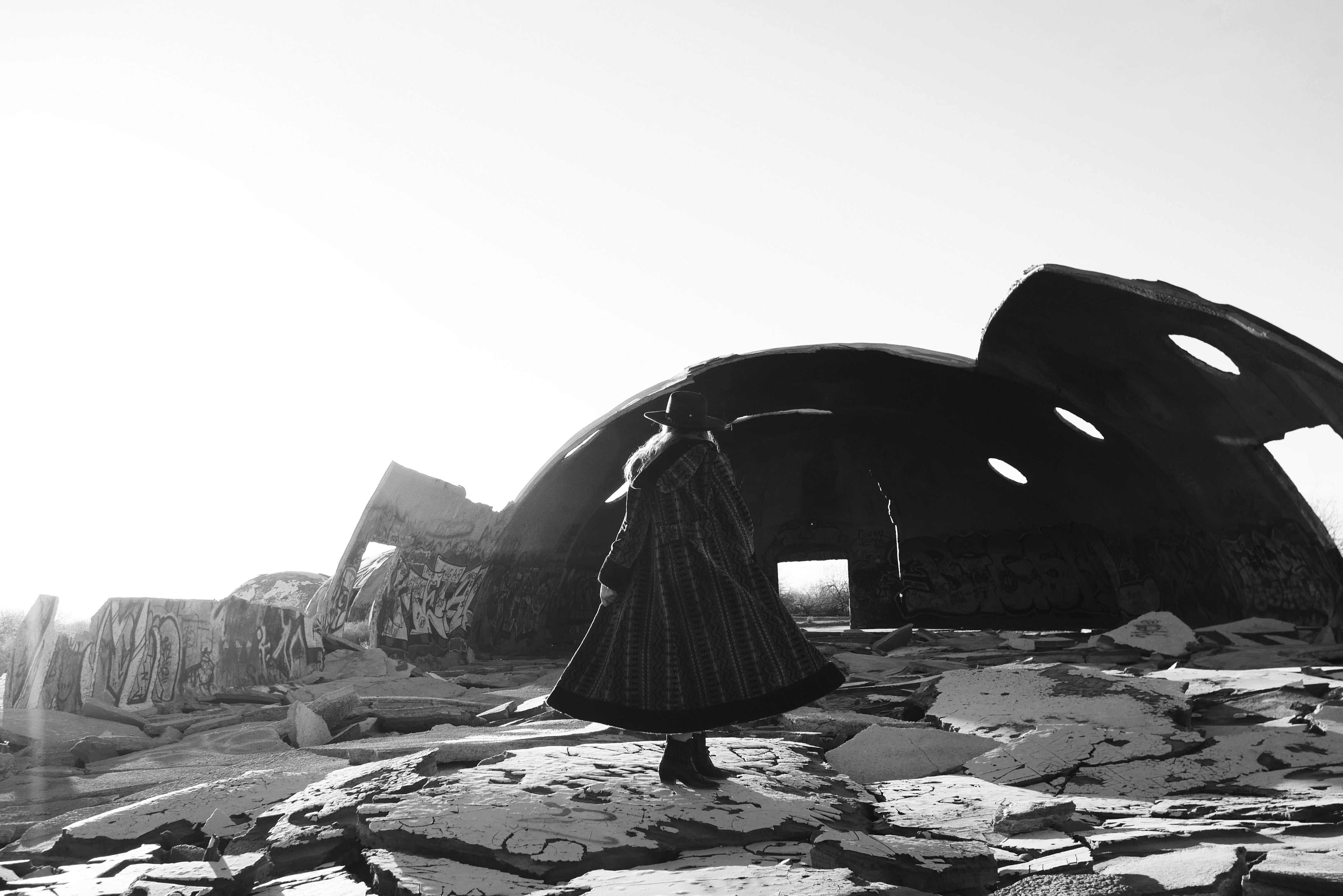 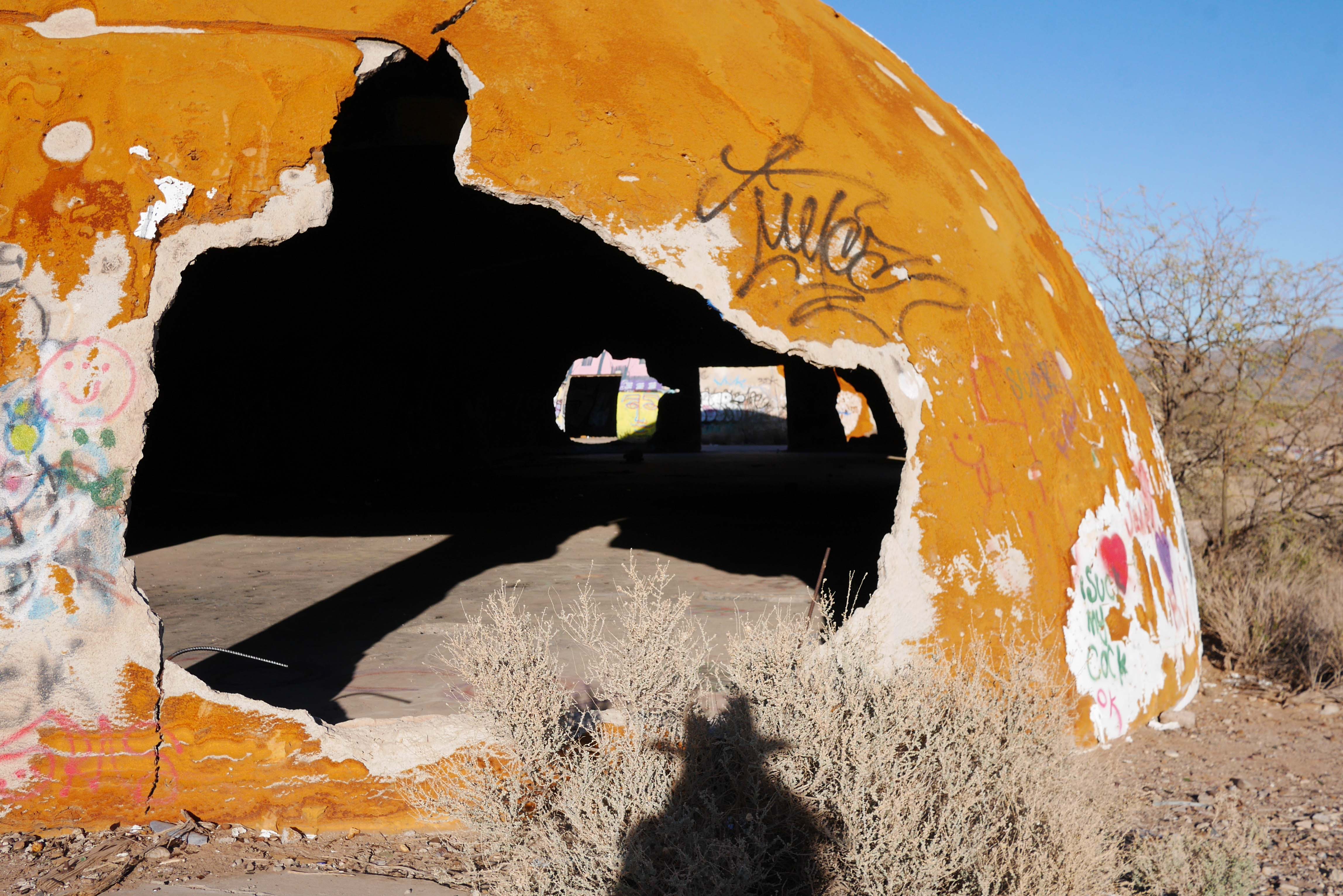 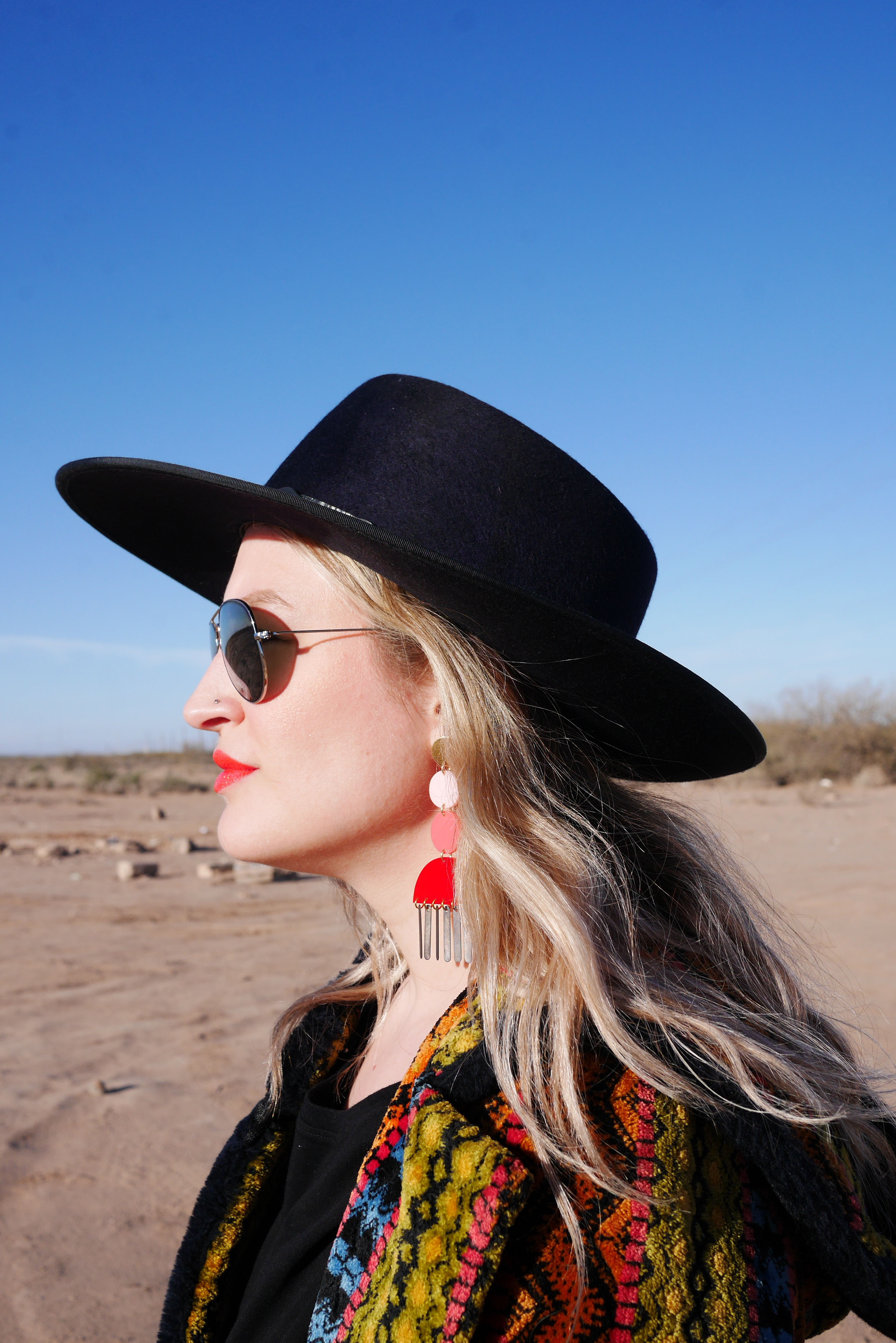 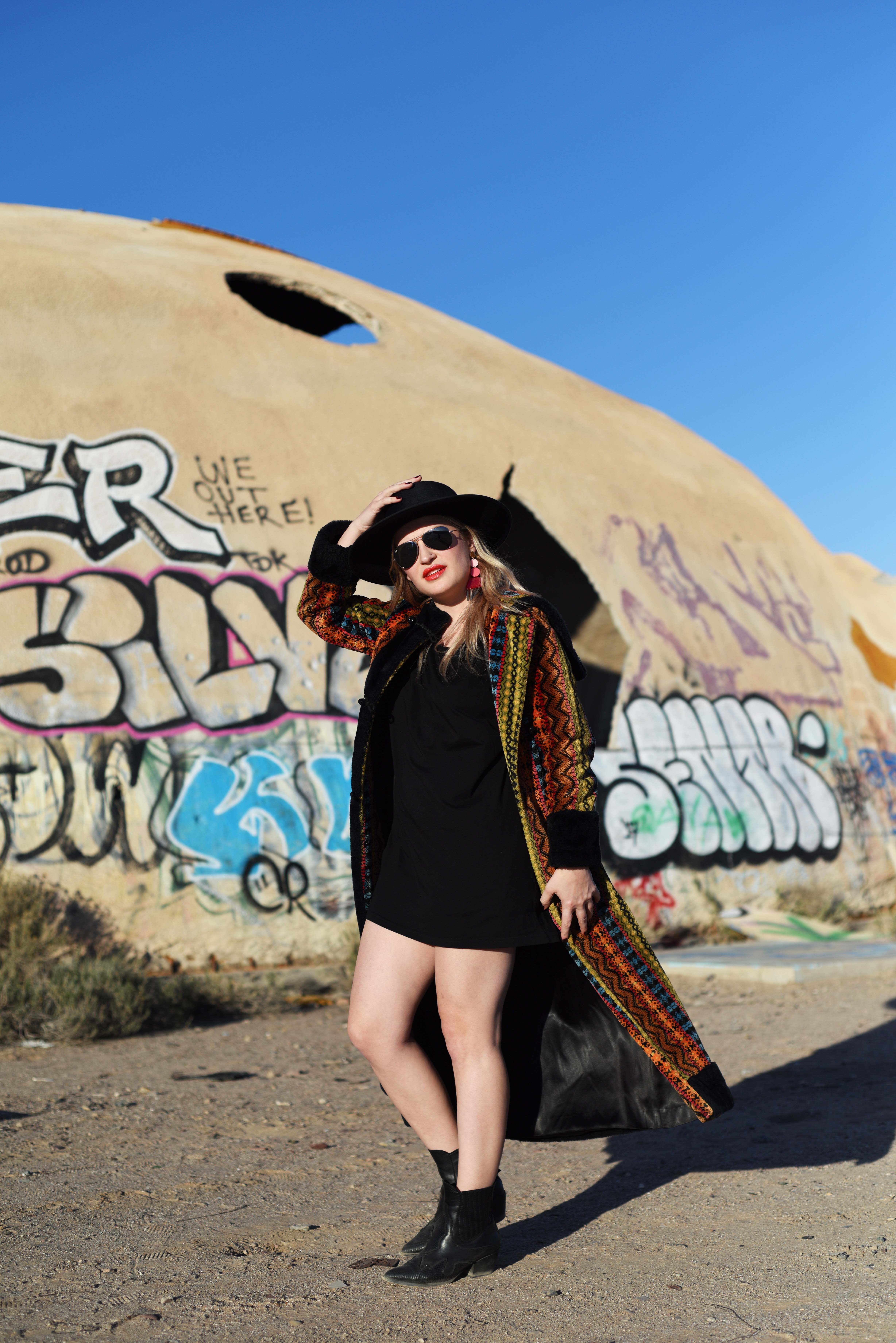 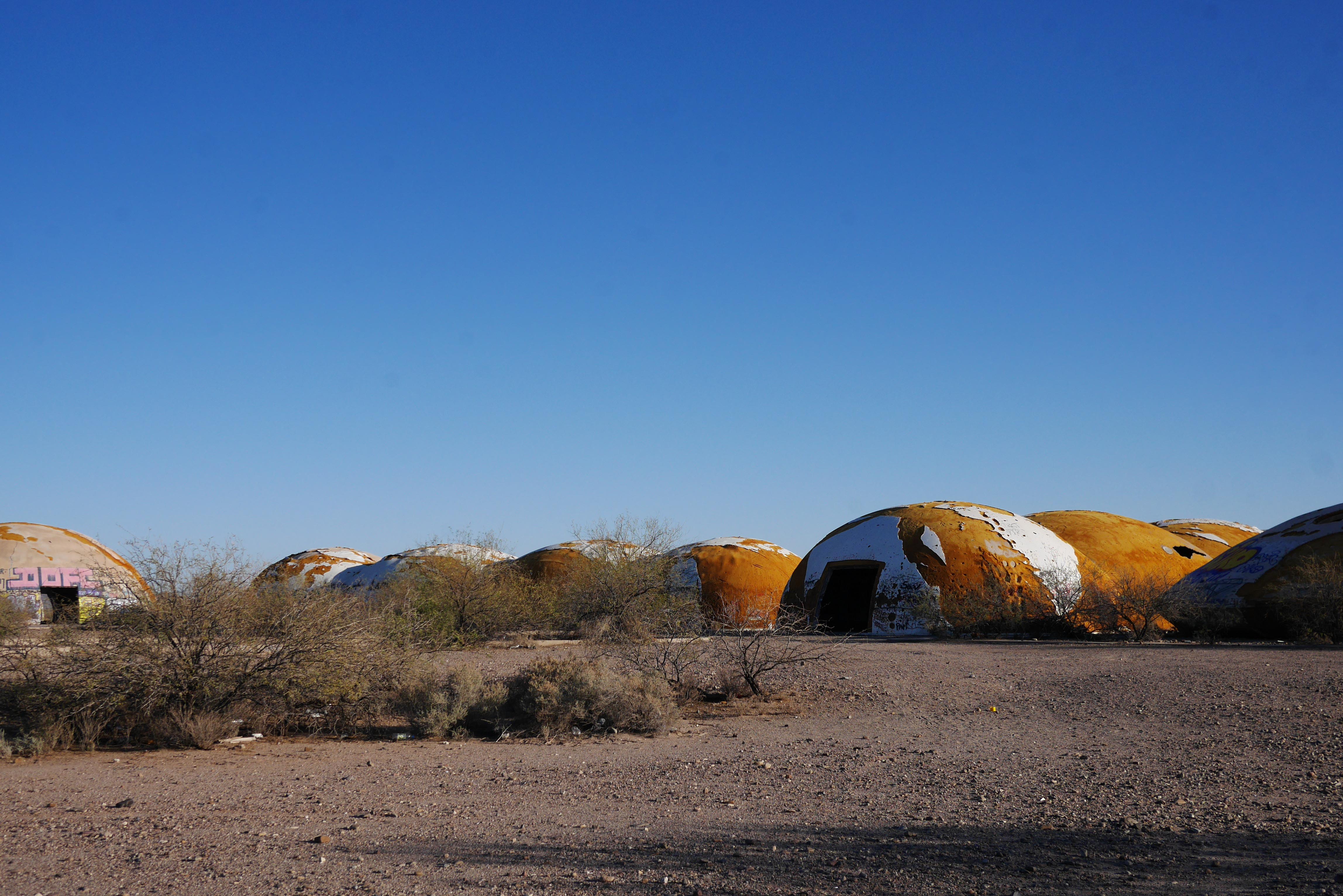 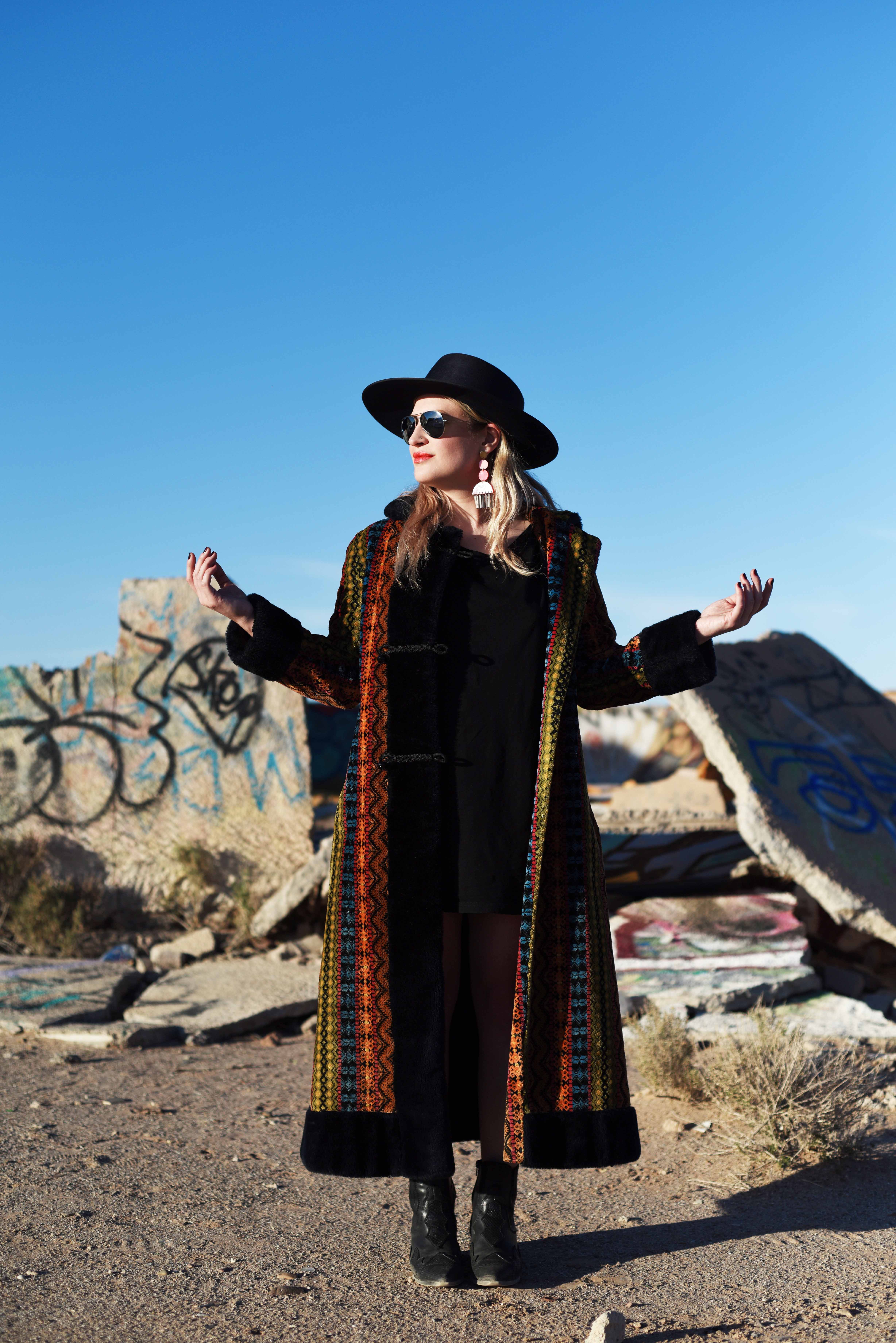 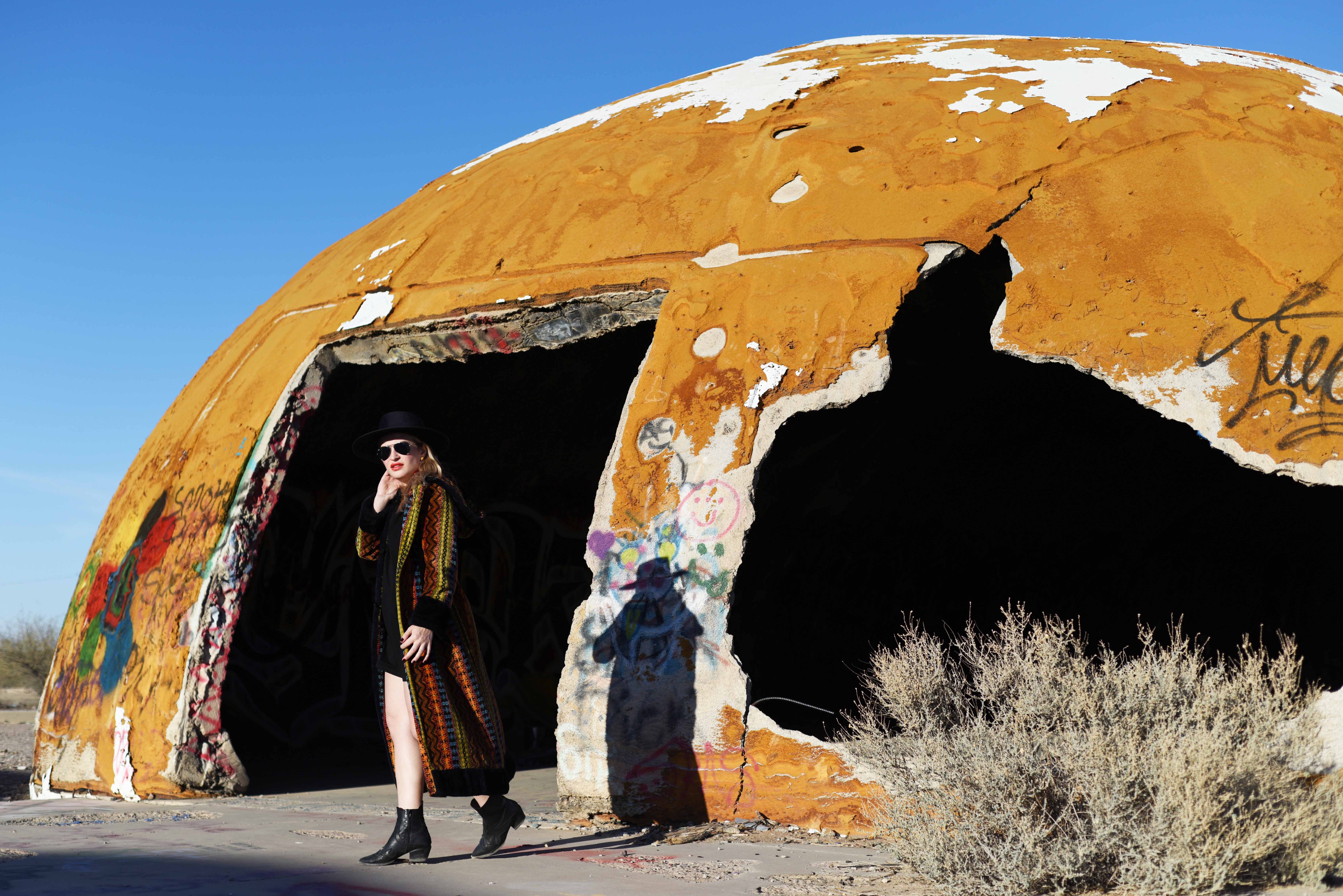 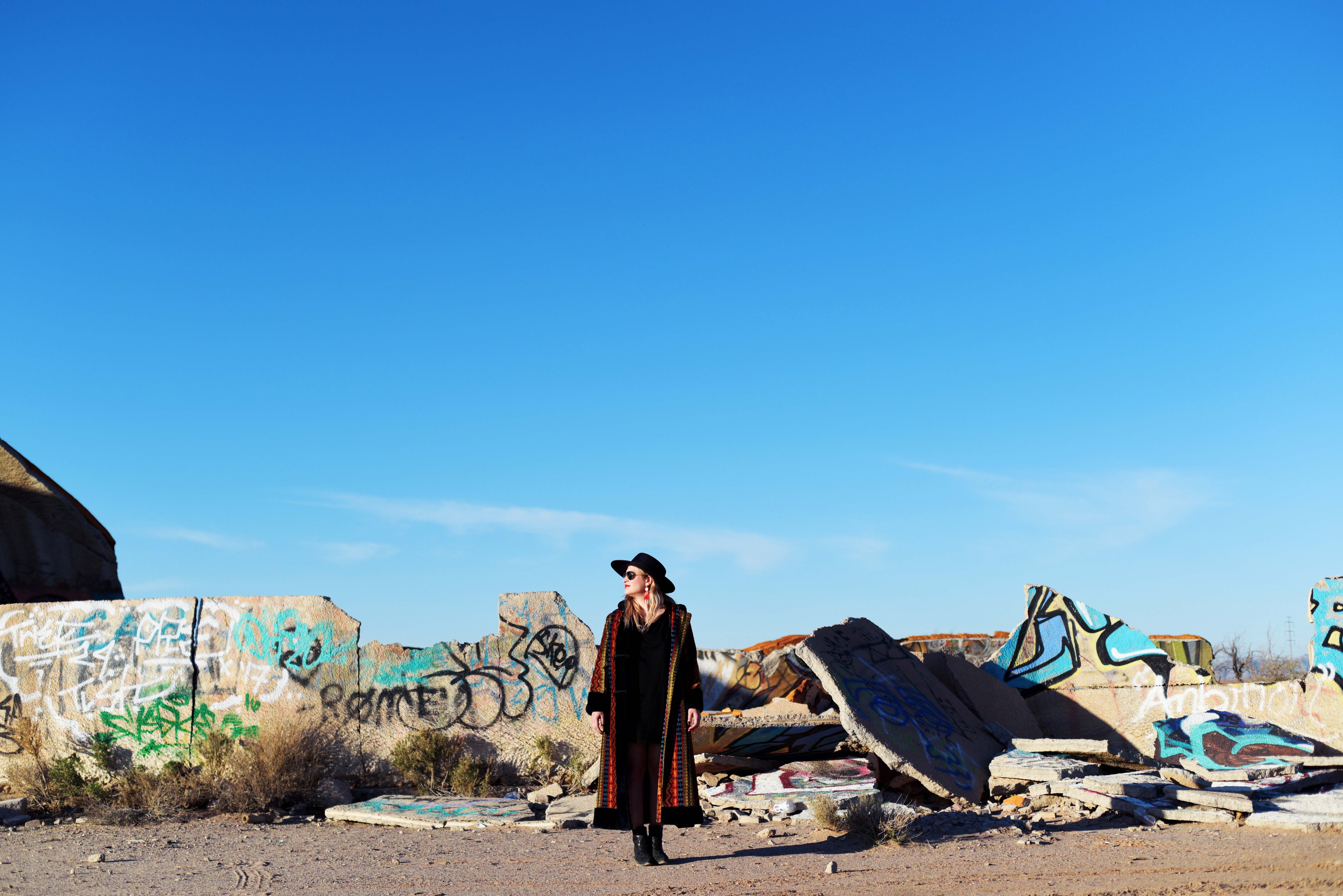 Despite the eeriness of the Casa Grande Domes, I will be sad to see them go. I wish someone would record an album in them. The acoustics are so strange and extra echoey. Calling all psych and chill wavey musicians: head to the desert fast! Would you ever go visit them? 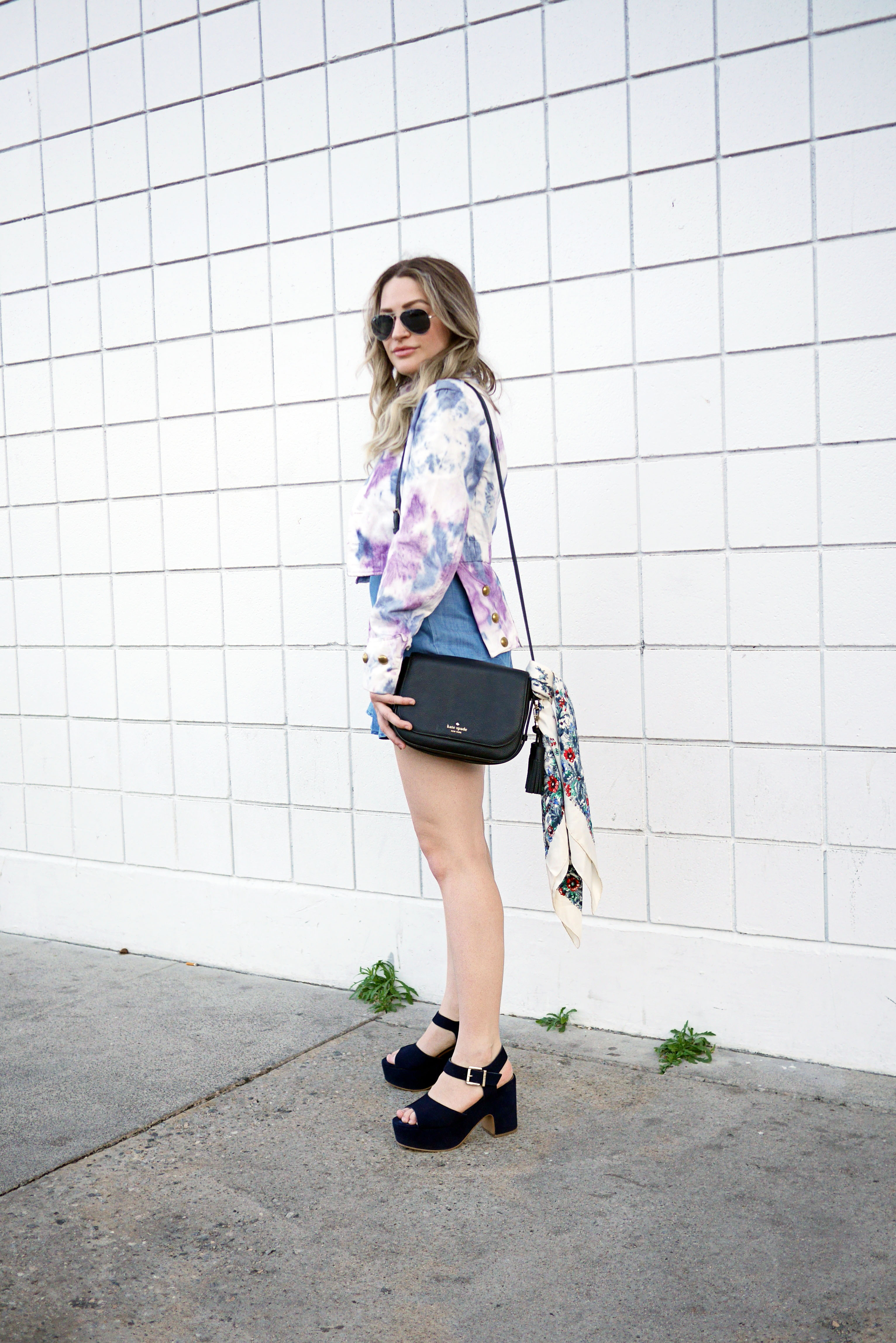 This jacket has somehow managed to survive several closet purges. Back when I was in elementary school, every summer we would head south to Reno, Nevada for Hot August Nights, a classic car auction. Along the way there was this unbelievable army surplus store my dad had just happened upon which we would pay a yearly visit to in Great Falls, Montana. While Roddo would be sifting through old bits and bobs with my sister, I would busy myself poking around the clothing area with my mom. One year, in an attempt to “jazz” up some old band uniforms, the store decided to tie dye a batch of them. I was mesmerized. I had to have one. I got one. Flash forward to the following school year in Grade 5 and NOBODY understood the piece so I was ridiculed (kids are so mean!) and rather than stand my ground, I tucked it into my closet with a sincere vow to myself that ONE day this jacket would an integral part of my wardrobe. That day has finally come… get ready to see this tie dye beauty on the regular. Never let someone else dictate your personal taste, it’s a lesson I’ve had to learn the hard way many times over. 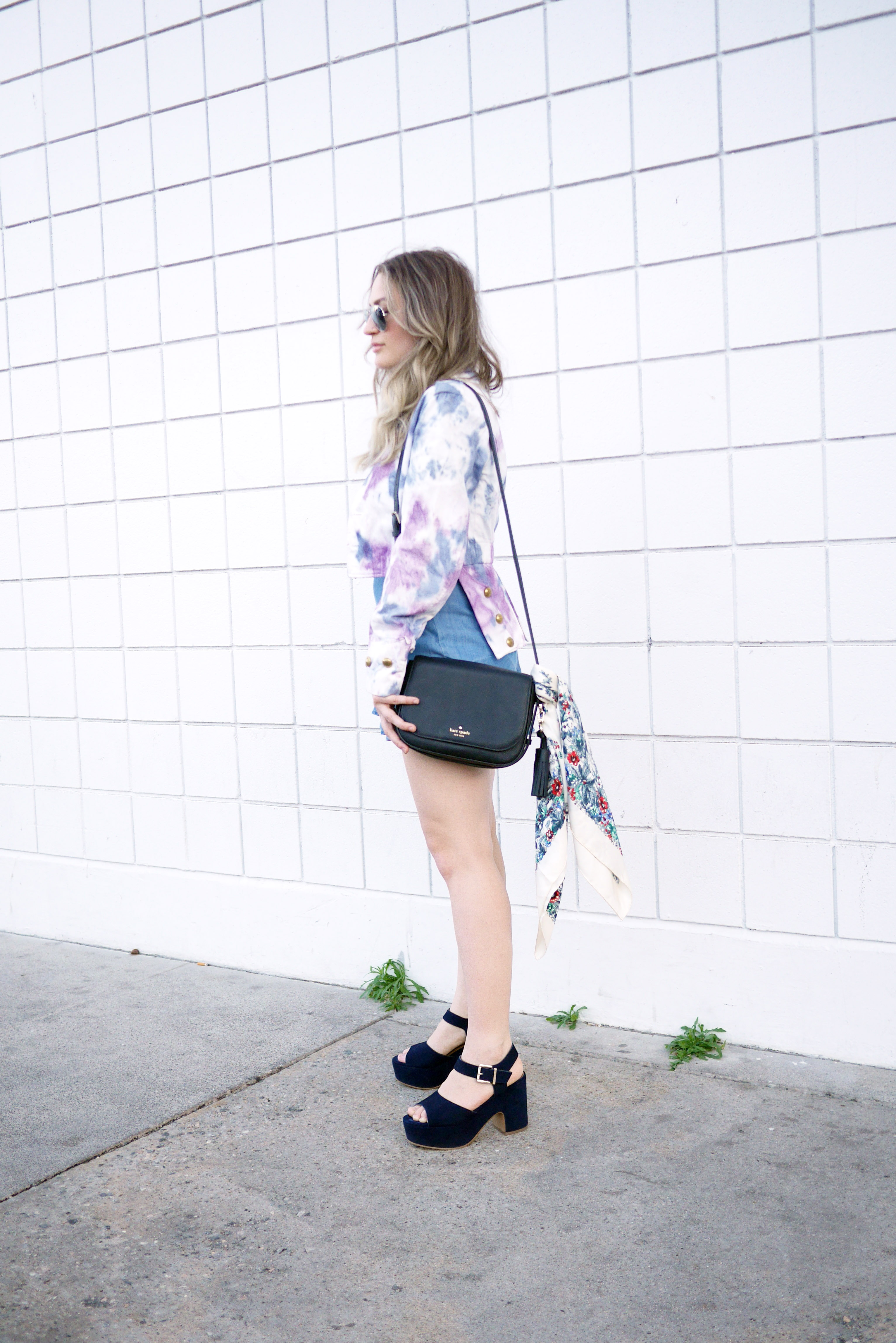 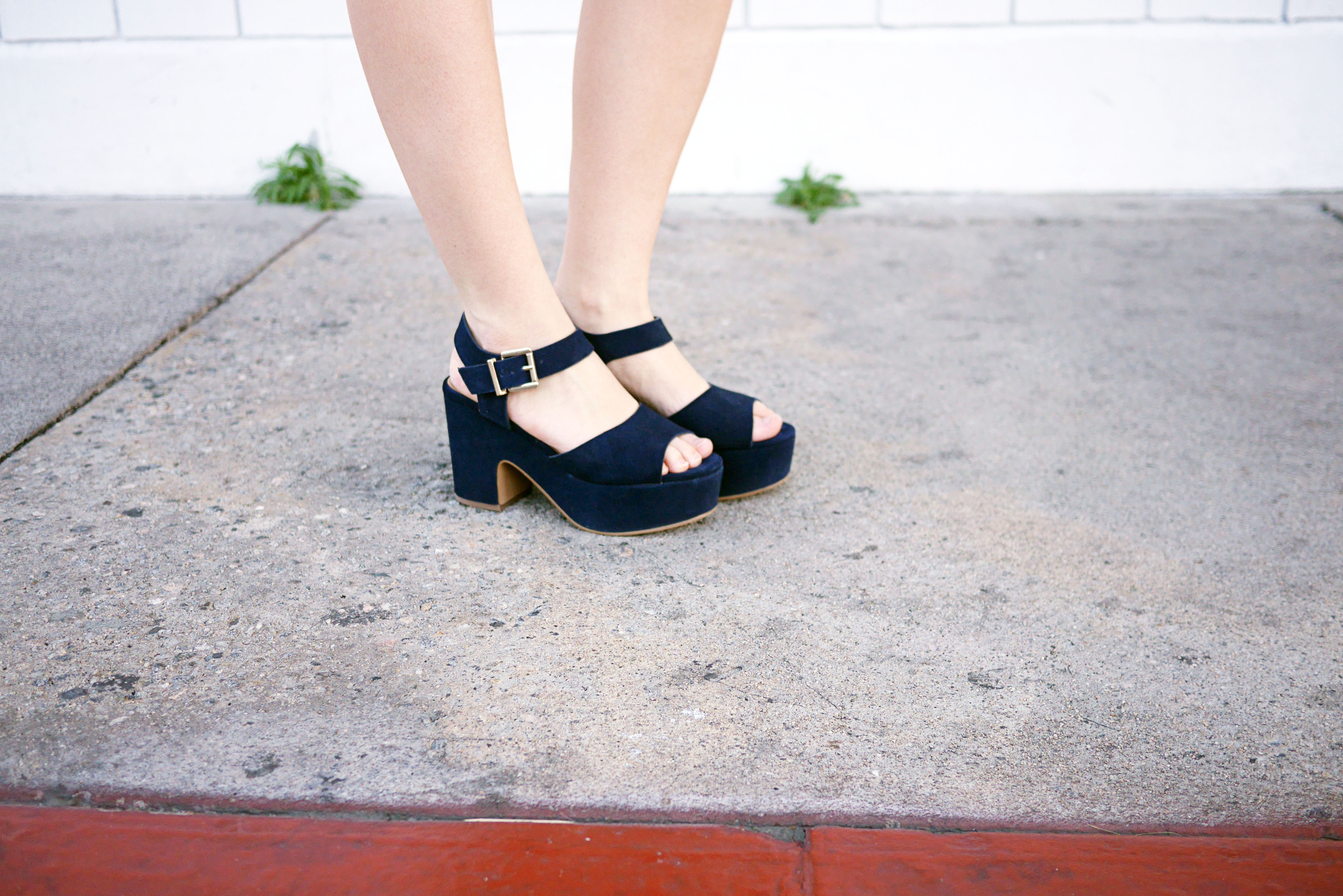 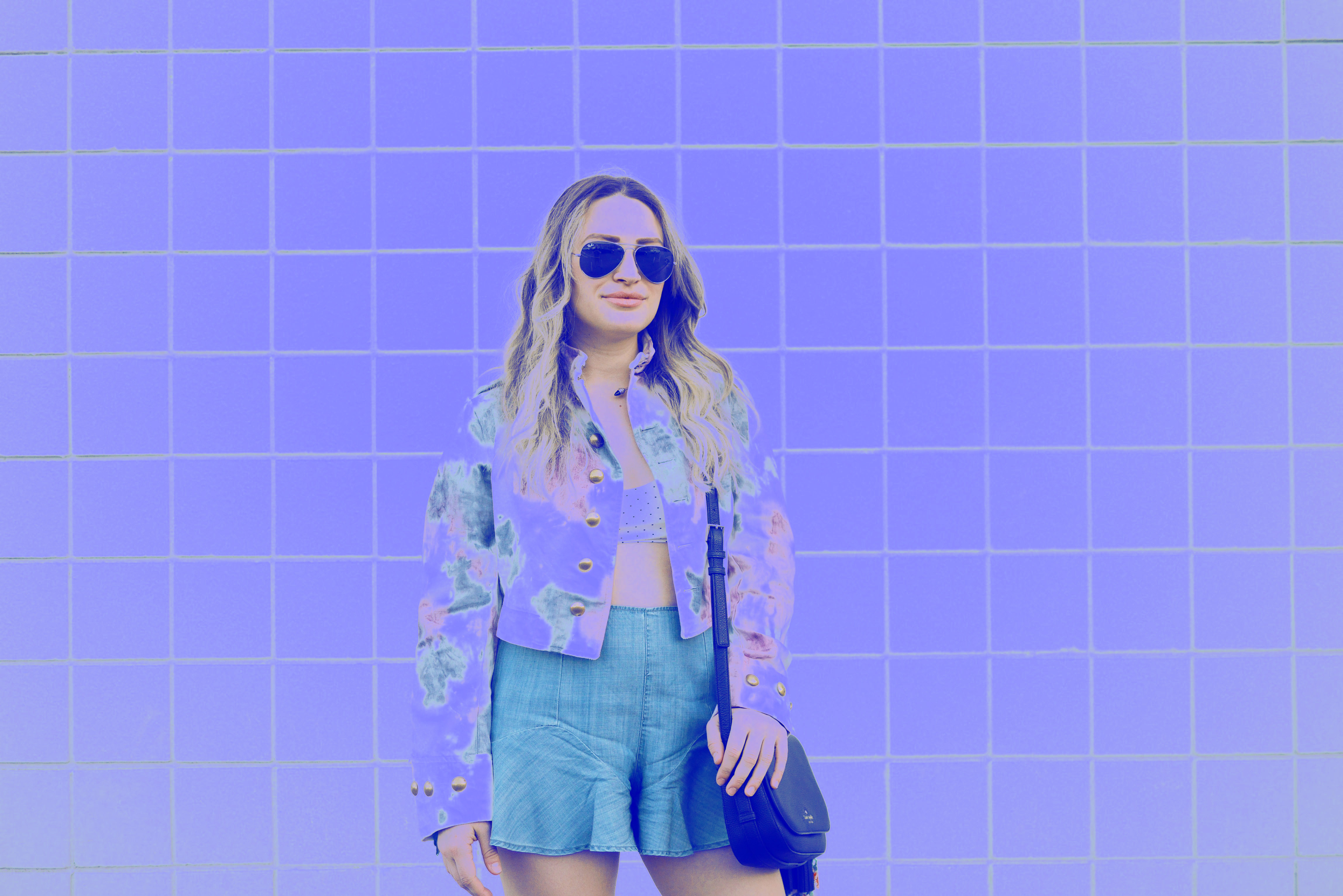 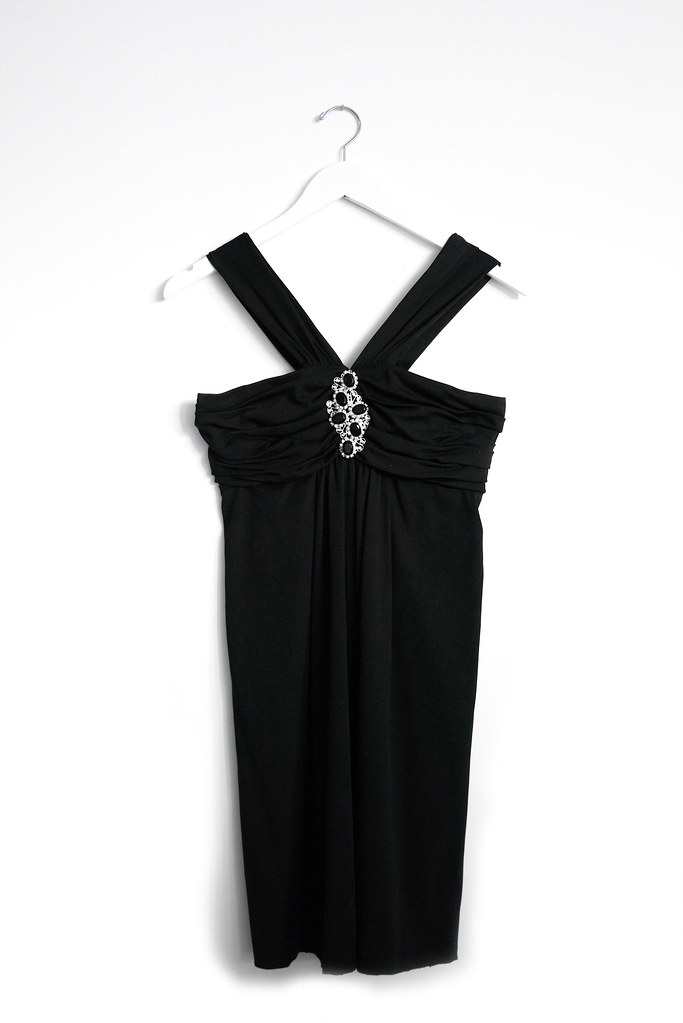 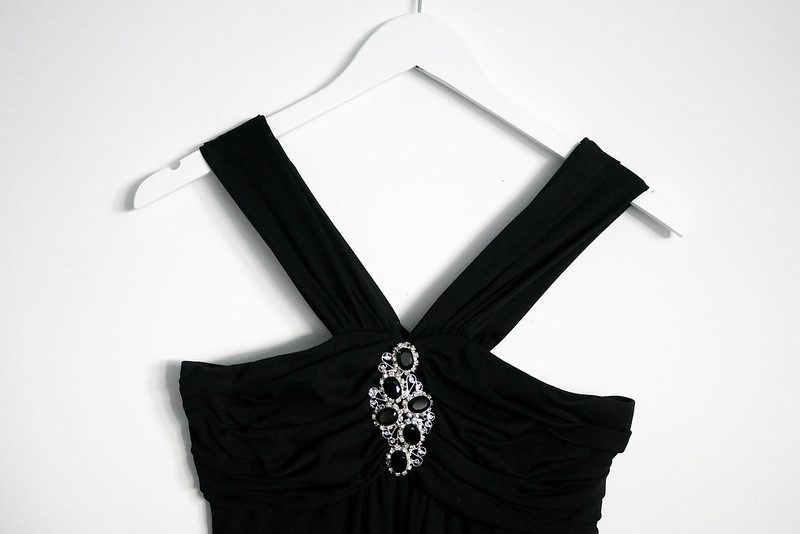 Happy Birthday to my lovely Baba Jean! I can’t get enough of old family photographs; people were so much more glamourous and well put together back then. These two shots are among my favourites of my Baba – the top shot of her being stopped downtown by a photographer in that stunning fur trimmed coat is a vibe I want to channel whenever I’m walking around but most likely will never come close to her elegance. The bottom shot in the mountains just looks insane, like it must be some sort of clever illusion. It is not. Modern day gondolas have nothing on this contraption!
Twitter / Bloglovin’ / Facebook / Pinterest / Instagram / Etsy
« Older Entries